Gravenhurst has always been one of my favourite triathlon courses. This year I was especially excited because for the first time in the past few years it would be below 30 degrees Celsius. I unfortunately came up with a cold mixed with nausea on Wednesday, and began a heavy intake of Tylenol cold and whatever else I could find to help me recover for the race.

The swim began perfectly. I managed to quickly find a comfortable pace that I knew I would be able to maintain the rest of the race. I also managed to find a small group of swimmers going around the same speed to keep me from slowing down. This continued for the majority of the swim. around 200 meters from the finish I felt my form begin to fall apart completely and really slowed down. Since the majority of the swim had gone well, this had only a small impact on my time and I still improved over my swim last year. 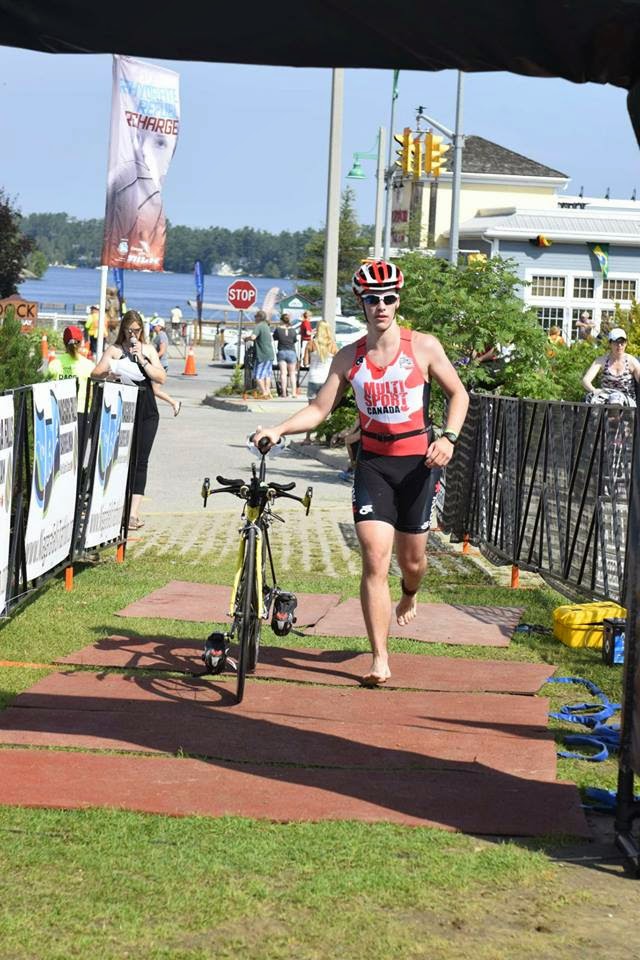 My bike ride was uneventful for the most part; after the halfway point I ended up in a gap between riders. I couldn't see anyone ahead or behind me until around 38km when someone sped past me. Despite being alone I managed to put up what I felt to be a strong bike especially since I was trying to save some energy for the run.

My goal for this Olympic was to start improving on my run time, which is equally bad compared to my biking and other competitors, however the run has a much larger effect on my time. I decided I would bring a watch in hopes of being able to push myself if I noticed my pace slipping. This was working, and I was feeling great until 3k when I began to feel sick like I had been all week. This was also around the time my Tylenol cold from the morning would be running out which only made sense. The nausea became too intense to run meaning I had to spend the next 4 kilometers walking. At around 7k I began improving and I started by jogging downhills and by 8k I knew I could finish off the race jogging. My legs had tightened up a lot from the walking but loosened up quickly as I was running in. I would have liked to finish faster; however with being sick during the week I was quite happy with my time and am looking forwards to improving on it later in the season.